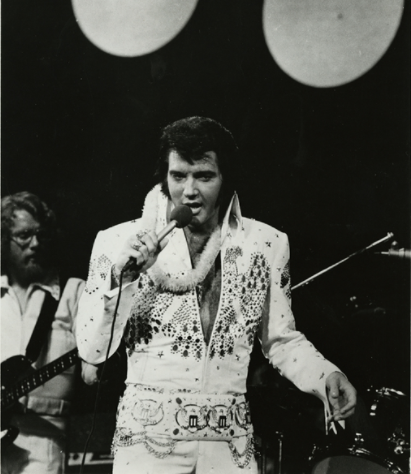 It was only a few months ago that packed movie theaters saw the garish, campy ode to the king of rock and roll that was Baz Luhrmann’s “Elvis.” Fascinated by Vegas marquees, mumble rock music and Austin Butler’s Mississippi-Memphis accent, young and old caught a glimpse of the Elvis maniac culture that defined the mid-century. But the Elvis that Luhrmann introduced to the world looks a lot like the rocker’s candy-red bedroom: too pink to be true. Luhrmann brought the most positive version of Elvis back into cultural consciousness. For months last summer, he trapped viewers in a sweet sanctuary for the king, made even sweeter by the near-perfect portrayal Butler delivered. And now Sofia Coppola wants to bring those same moviegoers back to the land of cotton candy — maybe.

With a soft, dreamy palette and dark teenage aesthetic in hand, Sofia Coppola (who is the daughter of Oscar-winning director Francis Ford Coppola) brazenly redefined the indie film scene in the late 1990s and early 2000s with classics like “The Virgin Suicides”. “, “Marie Antoinette” and perhaps the most famous, “Lost in Translation”. Now, the one who has become one of the most emblematic female filmmakers of the last thirty years for her dreamlike realism wants to tell the story of an icon dressed in sequins and jet black hair, someone whose life transcends almost the limits of reality: Priscilla Presley.

Even though the headlines for Coppola’s next film appear to only feature information about Jacob Elordi’s casting as Elvis, the new image doesn’t actually focus on the rock icon. Instead, Coppola focuses on the story of his wife, Priscilla Beaulieu Presley, described in her 1985 memoir “Elvis and Me.” Profiling Priscilla Presley seems like an obvious choice, not only given the current obsession with Elvis, but also because stories of women like Priscilla are gaining attention and validity.

Coppola’s announcement comes in the wake of a massive movement to re-empower a more traditional brand of femininity. Cultural feminism is once again opening its arms to women and women who identify with conventional versions of femininity. The housewife and the girly-girl dressed in pink are beginning to receive the same respect as the Madison Avenue woman in the power suit. While this long-awaited movement is overwhelmingly positive, it has allowed some problematic narratives to re-enter pop culture.

As people confidently post gifts from sugar daddies on TikTok or mock Leonardo DiCaprio’s revolving door for women under 25, the story of an older man dating a younger woman is turning into something not only extremely visible but legitimate. However, while a relationship with a wide age gap is acceptable between consenting adults, many children have begun to fetishize this enchanting type of romance and the people, like Priscilla Presley, who exist in it.

Young people have pinned Priscilla Presley as their icon of glamorous femininity. Rates of Pinterest boards listing only her hair and fan edits from her honeymoon to Lana Del Rey’s “Young and Beautiful” skyrocketed, especially after “Elvis” brought her back into the public eye. She remains one of the few people still praised almost solely for an image related to her late husband. Despite creating a successful line of clothing and skincare products and his award-winning stint on one of the most popular shows of all time, “Dallas,” Presley pushes those personal accomplishments to the back burner in favor. to devote themselves to Elvis, even decades after their divorce. People still think of her as the big-haired girl in the pink suit desperately in love with her rockstar because she wants him. There’s nothing wrong with supporting people who dedicate their lives to boosting the success of those they love, but when Priscilla’s image is praised, in particular, it underpins a culture of manipulation and abuse. ‘abuse.

According to “Elvis and Me,” Elvis groomed and dated Priscilla Beaulieu from the time she was fourteen. Ten years his senior and infinitely more influential, the king slowly transformed this teenager into an image of himself, fixing his hair and clothes to embody his perfect wife – a woman who looked like him.[Etquandelleaexpriméuneopiniondissidenteilalibéréunecolère”commelegrondementdutonnerre”quePriscilladécrit”Parfoisils’enprenaitjustepourmarquerunpointPuisdixminutesplustardiliraitbienlaissantnousabasourdisetépuisésémotionnellement…Ilétaitvraimentunmaîtredanslamanipulationdesgens[Andwhensheexpressedadissentingopinionhereleasedananger“liketheroarofthunder”whichPriscilladescribes“Sometimeshelashedoutjusttodrivehomeapoint…Thentenminuteslaterhe’dbefineleavingusbewilderedandemotionallydepleted…Hewastrulyamasteratmanipulatingpeople”[Etquandelleaexpriméuneopiniondissidenteilalibéréunecolère”commelegrondementdutonnerre”quePriscilladécrit”Parfoisils’enprenaitjustepourmarquerunpointPuisdixminutesplustardiliraitbienlaissantnousabasourdisetépuisésémotionnellement…Ilétaitvraimentunmaîtredanslamanipulationdesgens[Andwhensheexpressedadissentingopinionhereleasedananger“liketheroarofthunder”whichPriscilladescribes“Sometimeshelashedoutjusttodrivehomeapoint…Thentenminuteslaterhe’dbefineleavingusbewilderedandemotionallydepleted…Hewastrulyamasteratmanipulatingpeople”

Beneath the tortured soul in the suave image of the leather jacket was a man who created a doll from a human being and a girl who denied her youth through abuse and manipulation. However, when Priscilla tells her story, only sweetness emerges.

Although there are brief flashes indicating Elvis’ emotional abuse, “Elvis and I” mostly reads like the diary of a woman who still has Stockholm Syndrome, even years after the death of her captor. Priscilla praises her net gain of just 4 pounds during pregnancy as a triumph of her feminine beauty because she maintained Elvis’ affection. She castigates women like “broad-shouldered” Ursula Andress (a true Bond girl, considered one of the most beautiful women of her time) because of love rivalry. Her memoir is peppered with the insecurity of a young girl commodified and praised for her physical beauty – a real-life tragedy that was fetishized by new young Elvis fandom due to the regal aura that was boosted in “Elvis”.

None of that reality, from grooming to handling, presented in Luhrmann’s film. In fact, Priscilla, despite being nearly 50% of Elvis’ life, spent less than 15 minutes onscreen in the 159-minute film. In Baz Luhrmann’s defense, it’s not inherently wrong to omit the more controversial aspects of a person’s life story in order to give audiences a “fan movie.” However, if creators hide a character’s controversial sides in media, the truth must be just as public as the fiction in some way. The population does not deserve to be manipulated by an all-pink narrative.

Sofia Coppola may have taken it upon herself to tell the truth, giving Priscilla a voice that only cheers Elvis. However, if Coppola (already known for romanticizing female suffering) chooses to follow Priscilla’s sugar-coated tone to the letter, the film could end as another sweet, sickly ode, and too much sweetness can poison a pot.