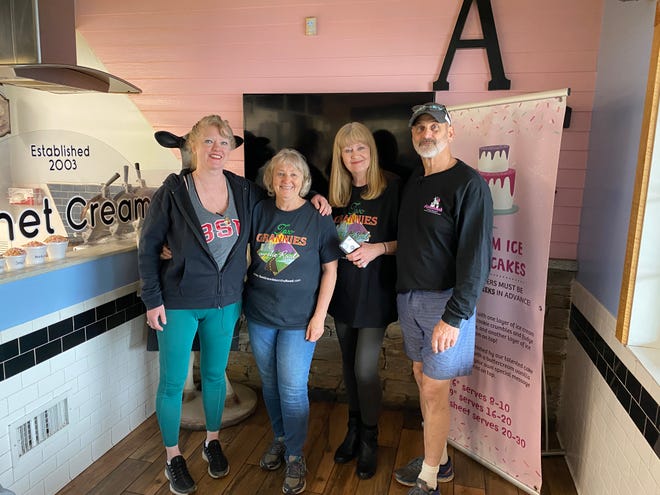 Two Grannies on the Road movie tv series in Acushnet

ACUSHNET — A Massachusetts grandmother aims to visit the 351 counties, towns and cities of the Commonwealth, and last week. Acushnet marked its 31st trip.

“People were so nice to us. We had such a great time,” said Beth Sobiloff, 72, creator of “Two grannies on the road” which is also a TV show on Youtube and the Plymouth area public access television.

Sobiloff, who is bringing a guest grandmother (this time Louisa Clerici), traveled to Acushnet to visit several locations and learn all about its history.

The first stop was a Restaurant in La Rochelle for breakfast, where they tried homemade muffins and cheese bread. “Their food was awesome,” Sobiloff said.

Opening of Chick-fil-A in Fall River: What you need to know about hiring, traffic and more

The restaurant had a large sign above the kitchen welcoming grannies. “Everyone wanted to take pictures with us,” Sobiloff said with a laugh. “It was really fun and sweet.”

Their next stop was at Acushnet Creamerywhere owners Doug and Donna Coray showed them how to make cookie dough ice cream.

The grannies also visited the Long Plain Museum to chat with two members of the historical society as well as the 9/11 Memorial, Acushnet Library, Friends’ Meeting House and the ruins of White’s old factory on Hamlin Street.

The duo also visited Cafe Rescue, a coffee truck that donates profits at a local Acushnet animal shelter and had lunch at Captain’s Square.

“The food was to die for,” raved about Sobiloff, who ordered the stir-fried sea bass and kale soup. They also tried the flan for dessert.

“I’ve never had a flan like this in my life. It was a huge, very tall piece, like twice the size of a cheesecake,” she added. “And the caramel sauce was just gorgeous.”

She also tried another dessert called “grandma’s pudding”, which was a vanilla pudding with crushed Portuguese cookie.

They ended their day early because of the rainy weather and super full stomachs.

“We couldn’t eat another bite. We were so full,” she joked.

How grannies hit the road

Sobiloff said she developed the concept for “Two Grannies on the Road” nearly 11 years ago when she ran her own website design business, but was desperate to travel.

“I had never taken vacations because when you work for yourself, you don’t take vacations often,” she said.

Sobiloff said she always wanted to cross the country with her children. However, she could not afford to suspend her activity for more than a few days.

“It quickly became, ‘what can I do for fun locally?'” she added.

At the time, she was single and didn’t want to do it alone. So she invited another grandmother for the adventure.

How it became a TV show

Years later, she thought of a concept for a TV series interviewing baby boomers who had reinvented themselves – to tell their stories to inspire others to live their dreams, no matter their age.

“A lot of times they retire and then they want to do something else,” she said.

The TV show quickly turned into a concept of traveling through Massachusetts’ 351 counties, towns, and cities and meeting others of a similar age along the way.

Sobiloff was accompanied by “guest grannies” for a time until she was joined by 13-year-old grandmother Debbie Thelen.

They visited towns like Spencer, Marshfield, Hull, Carver and Marion as well as towns like Worcester and New Bedford.

So far, experiences that have included Celebrate King Richard, attend the Herring Festival, watch a release of Titus (tortoise), see a polar bear dive, watch whales, and sample all sorts of different foods at several restaurants.

“It’s absolutely amazing. You just don’t know these things and until you do something like this, and find these little hidden gems and unique experiences,” Sobiloff said.

Recently, Thelen, Sobiloff’s “ride or die” grandmother, moved to Florida to be near her daughter. Now Sobiloff is back to take guests on the road with her.

Next, she plans to visit Chelmsford, Hubbardston, North Andover and Fairhaven.

“I’m a 72-year-old grandma who can still have fun too,” Sobiloff said. “And we do it because we love adventure, we love exploring new places and learning more about history and then sharing it with people through our show.

“I hope this inspires other people to think this way and get out and explore their area.”

Seth Chitwood, Standard-Times editor, can be contacted at [email protected]. Follow him on Twitter: @ChitwoodReports. Support local journalism by purchasing a digital or print subscription to The Standard-Times today.

Is a Priority Pass airport lounge membership worth it?