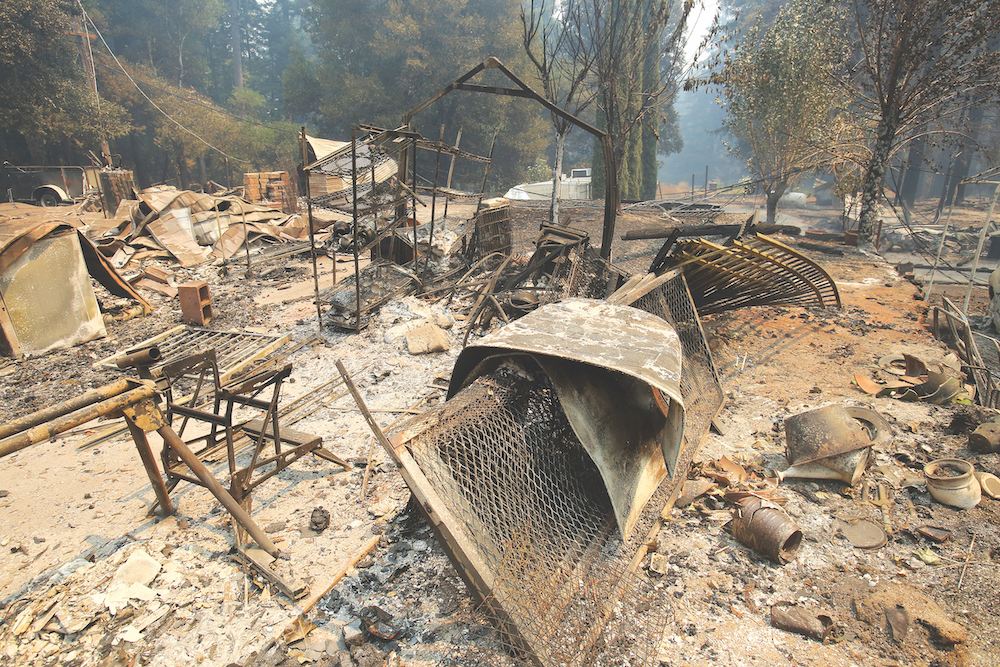 In honor of the CZU Lightning Complex’s second anniversary, Mountain Community Theater (MCT) director Peter Gelblum did something extraordinary to commemorate the event: he wrote a film about it.

From the film, titled, The CZU Fire in His Own Words: Fighting Fires, Losing Homes and Rebuilding CommunityGelblum said, “Our idea was to create a living document of the fire and the effect it had on the valley, as a gift to the community.”

Gelblum’s gift is scheduled to be delivered Saturday, July 9 at 7 p.m. at the Boulder Creek Recreation Center, with all proceeds to be split between the Boulder Creek Fire Department and the Community Foundation’s Fire Recovery Fund.

The film is made in a documentary style, with MCT members portrayed in the roles of fire survivors, resulting in a compendium of memories and local art, wrapped in music and presented to the community it reflects.

Gelblum said the impetus to make this film was an emotional response to the anger of the CZU Fire.

“The unprecedented destruction of forest and homes, the vast amount of emotional, material and ecological suffering, and the enormous outpouring of love and support from neighbors and the community,” he said. “As a performing arts organization, we were in a unique position to document this extraordinary event.”

When it came time to select stories to share, Gelblum had plenty to choose from.

“I had read about Brian Garrahan’s heroic ‘unofficial’ efforts to fight the fire, show people what was happening with their homes (including ours) and feed the animals (including our cat)”, did he declare. “I and others at MCT knew people who had lost their homes and had interesting stories about their fire experiences.”

The cast and crew of MCT found different messages and motivations in their roles. Actress Grace Peng, who plays Wu, said she felt honored to be part of the project.

“I was touched that MCT created a tribute to the victims of this close-knit community to commemorate the devastating effects of the CZU fire and how the people of Boulder Creek came together to help each other,” Peng said.

Wu, whose home was destroyed by the fire, returned to her restaurant as soon as she could after evacuation orders were lifted and went to work for free to feed survivors.

“I’ve met Jenny a few times, and she’s so sweet and generous and kind,” said Peng, who also pointed to a larger message at play. “In California, fire is part of our new reality. While the fire destroyed so many homes and personal items, the power and generosity of community, human connection and love, is unwavering and endures. This film would be relevant to everyone but could be of particular interest to those who live in vulnerable fire-prone regions.

Actress Sarah Marsh, who plays Mindy Lariz, said the idea of ​​participating in the film was a little daunting when first asked.

“I wanted Matt and Mandy Lariz (the couple that Nat Robinson and I portrayed) to feel heard, represented and loved. This film shows the resilience of the human spirit. We may hear this often, but these precious humans have actually been through it,” Marsh said. “During a deadly global pandemic, job and financial insecurity, calculated racial injustice and the wickedness of an upcoming election , they lost their homes, possessions and safety in this disastrous fire.Hearing their stories and seeing how they survived in the midst of so much heartbreak…how could you not be moved and amazed at their courage and tenacity?

Marsh also found solace in telling the stories of survivors.

“There is power in sharing our stories. I am grateful to Peter Gelblum for directing, directing and editing this project, and I am extremely grateful to those who shared it. May your stories bring solidarity and hope to others going through scary and difficult times,” she said.

Cabrillo Stage and MCT are actor, singer and dancer Mindy Pedlar’s second home. In addition to promoting the various plays and musicals of Cabrillo Stage, she is also an MCT staple and was given the role of Marj Young (wife of Steve Young, played by David Leach).

“I thought it was a wonderful idea for our community and I was honored to be asked to be a part of it,” Pedlar said.

Pedlar said she and Leach had the opportunity to meet the Young family and tour their property.

“I didn’t expect to cry, but the sense of loss was overwhelming and the tears flowed. The trees were trying to reassure me, saying ‘It’s okay, we’ll grow back,’” Pedlar said. “My heart ached for this couple who had lost so much, but I admired their desire to carry on, perhaps to rebuild and their gratitude that their family was safe.”

Pedlar said the film’s message was one of resilience.

“For me, this is an example of ordinary people going through a devastating experience, coping with great loss while somehow rising above the situation and coming together to help each other,” Pedlar said. “In these terrible times of pandemic and politics, it is heartwarming to see the generosity of our community as a whole. For all of us, it is important to be heard, especially when trauma has been experienced. This film gives voice to the survivors.

Leach, who has featured prominently in many of Gelblum’s MCT performances, said he believes “the main message is that tragedy is really hard for us, on a personal level, in so many ways and that’s always just around the corner”.

“But the human spirit, like the earth, is incredibly resilient and capable of recovering from almost anything you can imagine,” he said. “Or, if you want a simpler one, even in tragedy, it’s the people you love who are still the most important things in our lives. Tragedy doesn’t just happen to ‘the other guy’. It has the potential to strike any of us, at any time, without warning. So stay alert, be prepared to evacuate at any time. And covet nothing, treat others with dignity and love and you will wear better.

Helene Simkin Jara, who gave voice to Park Ranger Blake in the film, said she “felt honored to represent someone who had suffered such a great loss”.

“A main message of the film for me is the strong human capacity to survive and carry on even after such a huge loss. Also, the willingness of neighbors and friends to help each other in times of great need,” Simkin Jara said. “We never know when a tragedy will happen, and it can happen in the blink of an eye, so appreciation for what we have in the present matters a lot and that’s a good thing to keep in mind. .”

Gelblum said he looks forward to sharing the film with the community he represents.

“Mountain Community Theater funded the film as a gift to the community,” he said.

The first screening of the film will take place on Saturday, July 9 at the Boulder Creek Rec Center at 7 p.m. The film will also screen at one or two other locations in the valley, in Bonny Doon and possibly downtown Santa Cruz; Gelblum hopes to screen it at CZU’s second annual remembrance event at Brookdale Lodge on August 18, the second anniversary of the fire. It will eventually be posted on MCT’s website and YouTube channel.

10 DC Characters Wolverine Would Fall In Love With