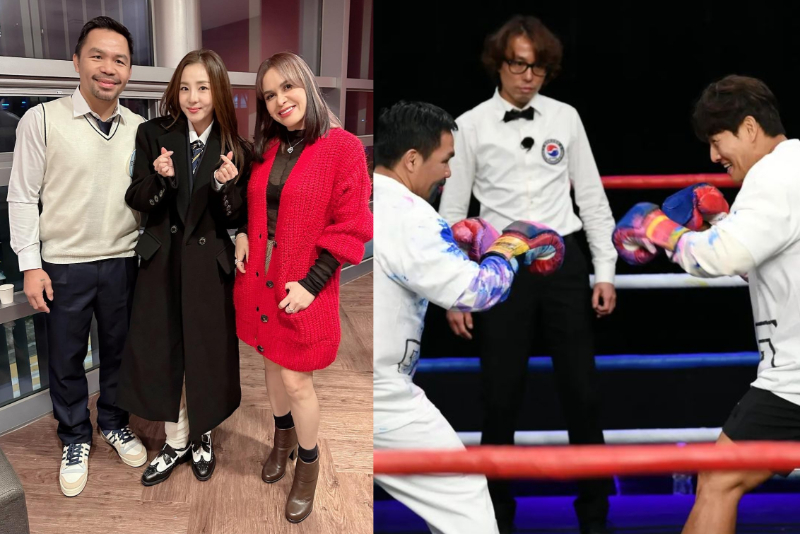 Fans were amused by the boxing icon Manny Pacquiao in his appearances on two popular Korean variety shows.

Pacquiao’s guest teasers in Korea “Running Man” and “Know the Brothers” were uploaded ahead of his charity exhibition fight in the country.

JTBC Entertainment, a South Korean television channel, aired the trailer for the 355th episode of its “Knowing Bros” show on Saturday (October 15) where Pacquiao and “Dara” or sandara park appeared as guests.

“Knowing Bros” is a long-running reality TV series in South Korea where male comedians welcome “transferees” into a classroom every week. It was premiered at JTBC in 2015.

The short trailer showed several funny interactions between Pacquiao, Dara, and the rest of the “Knowing Bros” cast members.

The video has so far garnered 337,845 views on YouTube. It is also the top 31 trending videos on the video streaming platform.

In the video, the brilliant career of the boxer was presented in the first scenes.

Pacquiao and Dara then entered the show’s classroom.

The Filipino boxer portrayed a transfer student from the Philippines while Dara served as his translator.

After spotting Pacquiao, Dara and the cast members goofing off in the classroom, they were later shown playing games and dancing to popular K-pop songs inside the classroom. a boxing ring.

Super Junior Member Shindong also appeared to serve as the referee for this segment.

Fans can watch the full episode on Saturday, October 22 on the JTBC network or wait for the video to upload to its YouTube channel.

“Running Man” is also a popular reality TV series in South Korea, known for its complex yet entertaining challenges for cast and guests. It premiered on Korean network SBS in 2010.

Last Thursday, the “Running Man” Instagram page also posted some standout moments as the cast filmed the episode with Pacquiao.

In the video trailer and stills, Pacquiao could again be seen in a boxing ring as he played games and other activities with the “Running Man” cast members.

Fans can catch the full episode on Sunday, October 23.

Following the release of these teasers, Filipinos couldn’t help but get excited about Pacquiao’s guest.

Other users have also created witty Korean keywords from Pacquiao’s name and brand as “Pambansang Kamao”.

Some Filipinos, meanwhile, hoped that both shows would have English subtitles once aired.

Pacquiao will travel to South Korea again in December.

He will have a charity fight against South Korean martial arts YouTuber DK Yoo at the Korea International Exhibition Center (KINTEX) in Goyang, South Korea on December 11.

Reports indicate that proceeds from this event will be used to rebuild homes in Ukraine and expand the “Pacman Village” in the city of General Santos.