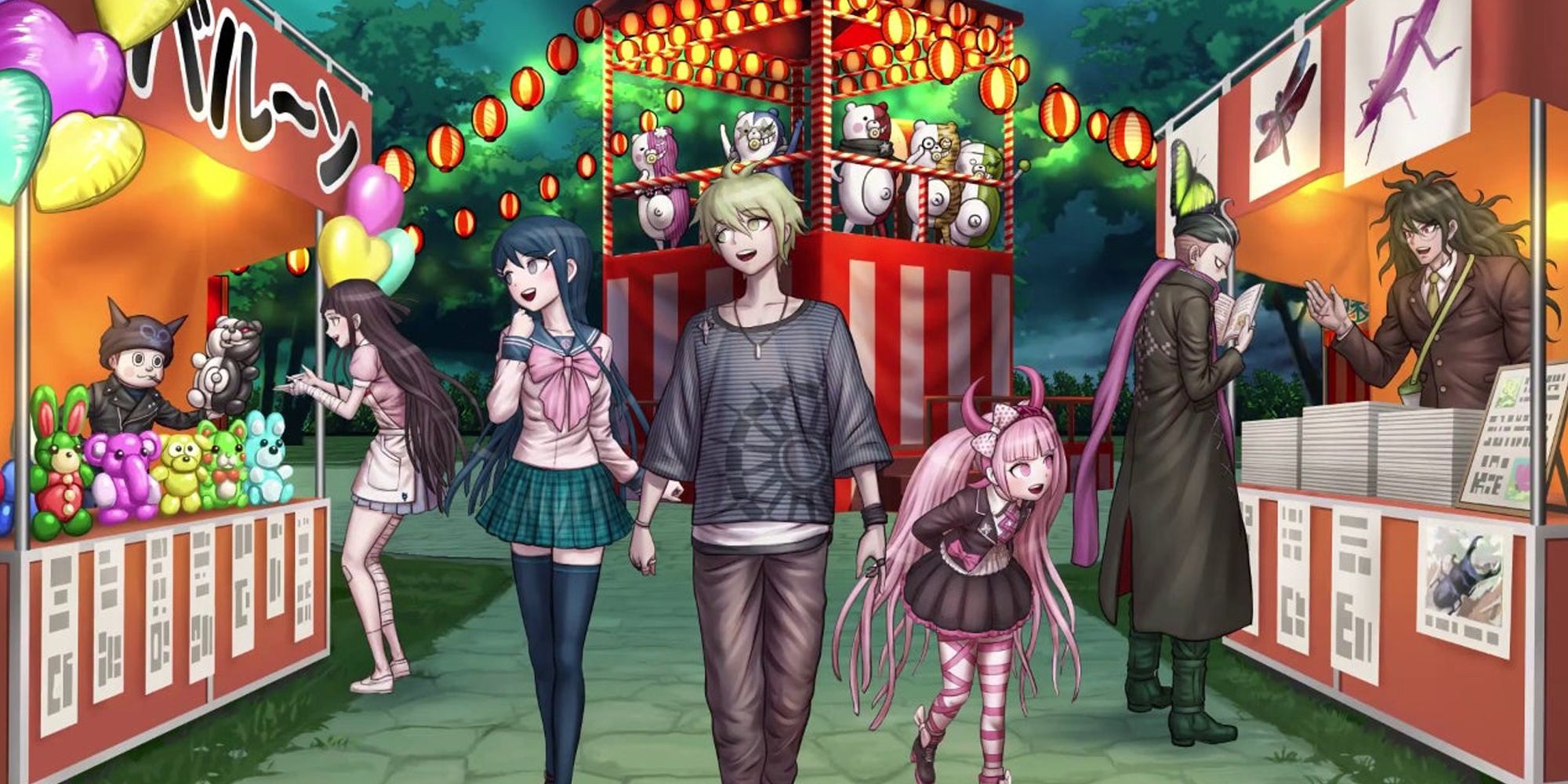 It’s no surprise that the Danganronpa series has a unique cast of characters. Each has their quirks that make them either extremely lovable or downright creepy. In this case, we are going to focus on characters that only give off positive energy and relaxing vibes.

Essentially, you wouldn’t mind spending time with them in the real world. This ranges from characters featured in the main games, including Danganronpa: Trigger Happy Havoc, Danganronpa 2: Goodbye Despair, and Danganronpa V3: Killing Harmony. No spoilers will be present, so don’t be afraid to read on. If anything, it gives you an introduction to the characters.

DUALSHOCKERS VIDEO OF THE DAY

You might be surprised that we’re starting things off with Tenko Chabashira. Tenko is a girl who is not afraid to show her emotions and to be direct when needed. She puts all her energy into Neo Aikido to relieve stress and anxiety. She is ready to fight for anyone who is not a boy and will defend them as much as possible.

Tenko’s hatred for boys is due to her past teachings, but even so, there are times when she doesn’t know why she hates them. As a result, she takes a liking to Shuichi Saihara and Gonta Gokuhara allowing her to understand them a little better. We all need someone who is going to be brutally honest with us in our corner.

Chihiro Fujisaki is someone you would want to protect as much as possible. Not only is Chihiro extremely talented, which befits his title as the ultimate programmer, but he is also very shy. Being someone who is bullied, Fujisaki makes it his goal to be stronger and not appear “weak with others”.

Fujisaki is one of the nicest characters in the Danganronpa series and would make a great friend. Having someone around you who radiates positive, healthy energy is necessary, especially in the world we live in today. Plus, everyone needs a smart friend in their party.

If you want someone in your friend group who thinks things through rationally and is levelheaded, then you want Sakura Ogami in your corner. Not only is Sakura extremely strong, but she wants to be known as the “strongest person in the world”. Despite her appearance, Sakura is a true sweetheart who wants to make friends but finds it difficult to do so.

During the Game of Death, she shows how loyal she is to her classmates and will do whatever it takes to protect them. Having someone like her by your side is reassuring. Since she spends the majority of her time training, it’s also a perfect opportunity to show her new things.

Aoi Asahina is sometimes a cheerful, athletic and giddy beachhead. In other words, who wouldn’t want to be friends with her? Despite what the game of death can throw at her, she always tries to find the good side of every given situation, no matter how difficult. Her reliance on exercise and her friends is what keeps her going.

No matter how depressed you are, you can count on Aoi to be there with you. She has this “leave no man/woman behind” attitude that is extremely heartwarming. Think of her as your own personal guardian angel.

It’s hard not to find pleasure every time Gundham Tanaka opens his mouth. Although never confirmed, it is likely that he is a chuunibyou. Most of the time, Gundham looks down on others and pretends to be a superior being, even though no one takes him seriously. However, Gundham turns out to be more goofy than serious.

There are many moments where he comes across as a misunderstood lover, especially when talking to Sonia Nevermind and her animals. If anything, it comes across as more “chaotic good” than anything else. Having it by your side ensures that you will never encounter a dull moment.

Everyone wants to have that friend who is always ready to play games with you no matter what time it is. Chiaki Nanami is the right girl to do this. With her being the Ultimate Gamer, you’re going to have to pull out all the stops if you want any chance of beating her.

Even though she lacks basic knowledge outside of the game, during the trials she is very analytical to understand the given situation. Because of this, she’s not afraid to get serious when people’s lives are on the line. Not only can she be fun, but she’s also reliable when you’re in a rush.

If there was to be a Danganronpa character who was to be characterized as an absolute “Brother”, then it would have to go to Kaito Momota. Kaito himself as a character can sometimes seem boring to some, but to others he’s actually extremely supportive, especially to Shuichi.

His loyalty and benevolent nature is what carries him through the killing game, which sets him apart among the V3 cast. Having a friend like Kaito by your side is enough to encourage you to do your best in whatever you do. If you fall and need help, you can expect him to be at your side to get you back up.

Kaede Akamatsu is a character who puts others before herself. She is not quick to blame others and uses logical thinking to find answers. She is kind, gentle and optimistic whatever the situation. She uses her ultimate piano skill to bring joy to others and see them smile.

Compared to the other protagonists of the Danganronpa series, she is the most active among the actors to put herself forward from the beginning. She can go from stupid to serious in an instant. Having Kaede with you is comforting because she makes it seem like nothing can go wrong with her.

With her golden brain and her beauty, Miu Iruma is never bored. Her personality shows in every sentence she says, and it doesn’t take long to figure out what type of person she is. She always insults people and throws vulgar remarks whenever she gets the chance, which can sometimes be funny.

However, this is all just a facade since as soon as she is ignored or someone responds to her, she easily becomes shy and scared. Her behavior can probably lead her back to social problems. There’s even a point where K1-B0 states that she’s a good, caring, and innocent person in reality. Seems like she really wants to make friends and be accepted.

Of the entire series, Ibuki Mioda is the most carefree, energetic, and bizarre character to be involved in the death game. She even has a habit of breaking the fourth wall and making iconic references. She wants to live in the moment and entertain everyone as much as possible.

Throughout her free time events, she makes it clear that she wants to help Hajime Hinata find herself by showing what a caring person she is. Although her methods may be unorthodox and unique, Ibuki is a bundle of joy that anyone would be lucky enough to know.