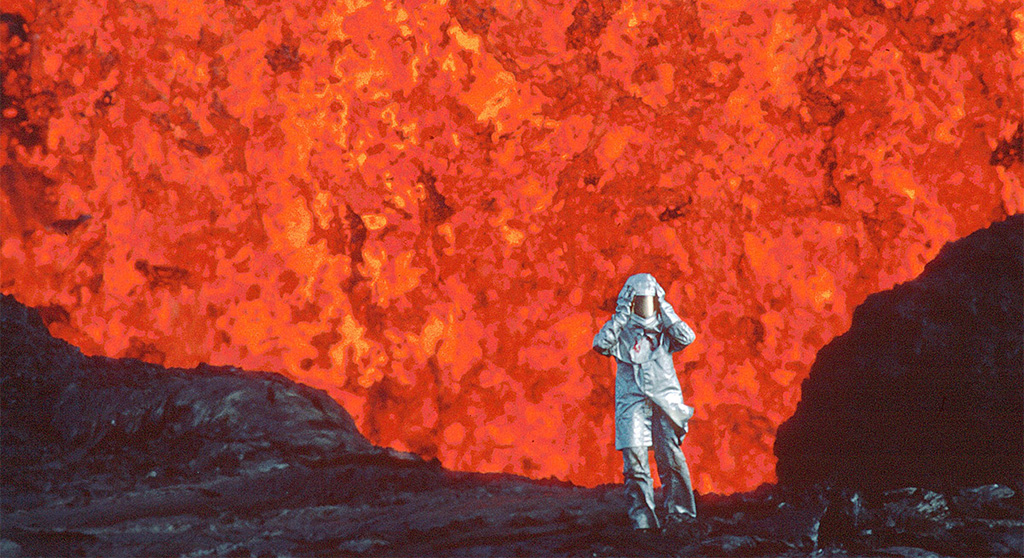 Cambridge heads to Woods Hole for a film festival, enjoys ‘Fury Road’ and feels the heat of ‘Fire of Love’

Film Ahead is a weekly column highlighting special events and repertoire programming for the discerning Camberville movie buff. It also includes capsule reviews of films that are not subject to a feature film review.

The 31st Woods Hole Film Festival is lining up next weekend. Yes, the doc fest is in person, and it will be great to be on the water during this heat wave. Although we do not normally promote film events outside of Camberville, many films and filmmakers have Cambridge connections.

“Free Renty: Lanier v. Harvard” by David Grubin (July 31) details Tamara Lanier’s fight to force Harvard University to cede possession of daguerreotypes of her great-great-great-grandfather – a slave named Renty. Cambridge director Garrett Zevgetis’ ‘On These Grounds’ (August 2) follows healer and activist Vivian Anderson, who uprooted her life in New York after a viral video inspired her to support a black teenager who was fired from her school desk and thrown through the floor by a white police officer in South Carolina. Then there’s Cambridge-based The DocYard’s Sara Archambault (which is playing the Brattle Theater but is on hiatus) as producer of “A Decent Home” (August 3), directed by the famed photographer and cinematographer Sarah Terry. It addresses pressing issues of class and economic inequity through the lives of mobile home park residents who cannot afford alternative housing. Q&As will include Terry and George McCarthy from the Cambridge-based Lincoln Institute of Land Policy. The Cambridge-based LEF Foundation is also one of the film’s backers.

Also playing is the animated documentary Shattering Stars (July 31) by Harvard professor Peter Galison about Subrahmanyan Chandrasekhar, a 19-year-old Indian physics prodigy who was publicly humiliated when his breakthrough hole discovery blacks collided with accepted physics. Decades later, he won a Nobel Prize for this discovery, although the experiment shattered his ambitions. And not to cede all local educational connections to Harvard, there’s Thomas Verrette’s “Zero Gravity” (Aug. 6), about a diverse group of college kids who enter the national MIT-sponsored Zero Gravity competition to code satellites at aboard the International Space Station.

Judy’s Worship (Judy Garland’s Centennial Celebration) continues at The Brattle Theater with screenings of “The Harvey Girls” (1946), with Angela Lansbury, Cyd Charisse and Ray Bolger – who starred with Garland in “The Wizard of Oz” (1939) – and “Meet Me in St. Louis” (1944 ), directed by Vincente Minnelli (Garland’s husband #2 of Five). Both play Monday and Tuesday. On Wednesday, the Lamplighter brewery is preparing an independent double program of Greta Gerwig’s first film, “Lady Bird” (2017) – it was nominated for five Oscars, including best picture and writing and direction for Gerwig – and Ari Aster’s joyously demented sequel to “Hereditary” (2018), “Midsommar” (2019). The crossover on the double bill, in addition to the two films made by new maverick filmmakers, is hard to discern. The folks at Lamplighter will be on tap to serve beer pairings in this kickoff of an ongoing program of “buyouts” by local dealership vendors at The Brattle. Also on the schedule this week are Thursday’s cult “Midnighter” curiosities “Basket Case” (1982) and David Lynch’s seminal atmospheric immersion, “Eraserhead” (1977), and then it’s on special engagements. They include the region’s first series of “Earwig” by Lucile Hadžihalilović, about a girl with ice cubes for her teeth (looks like this could easily be part of a future “Midnighters” slate), and a commemoration of 20 years from “Distant from Nuri Bilge Ceylan”. », about a Turkish photographer in existential crisis.

The “Complete Federico Fellini” program at Harvard Film Archives moves on to some of the director’s later work, including his nod to ‘the Eternal City’, ‘Roma’ (1972, Monday and Friday), in which Fellini makes a rare appearance; his point of view on the famous womanizer “Casanova” (1976, Saturday) with Donald Sutherland in the role of the too impatient libertine; and “The Ship Sails On” (1983, Sunday), about the intertwining of lives aboard a luxury liner on a journey to scatter the ashes of a famous opera singer.

This week’s big-screen repertoire at Somerville Theater is Mel Brooks’ biting, satirical western comedy “Blazing Saddles” (1974), starring Cleavon Little as the first black sheriff in a racist slum. Brooks regulars Gene Wilder, Madeline Kahn and Harvey Korman are in the cast, along with the indelible Slim Pickens. Bold and daring, “Saddles” seems even more relevant today, even if it seems unlikely that a film like this could be made now. He pushes the bear and gets lots of laughs no matter how many times you’ve seen him.

Road Life Retro Play from Tuesday night to Kendall Square Iconic Cinemas is George Miller’s triumphant return to the “Mad Max” series, “Fury Road,” some 30 years after his third installment “Thunderdome” (1985) seemed to end the franchise. Not that it’s bad, but compared to the original gem and 1979 trilogy “The Road Warrior” (1981), it felt something less, and not the right way to end things. This 2015 reimagining has nothing to do with Mel Gibson; Tom Hardy fills the role of Max. (Miller says he views Max as resembling Superman or James Bond: an ageless entity that can be played by many.) We barely meet Max before he’s kidnapped and used as a blood bag to infuse warriors into. albino on a relentless mission. The real center of the film is Charlize Theron as Furiosa, a wasteland warrior with a bionic arm, and the band rolling in pursuit of Furiosa’s cargo which is steered by a monster truck crowned by a gore-metal guitarist. and a cascade of amps. It’s a garish, dystopian spectacle that’s essentially a long car chase through the desert – exhilarating, surprising, and not to be missed on the big screen. This is the last of the “road life” series; next month it’s Hitchcock.

In theaters and streaming

Sara Dosa’s documentary about renowned French volcanologists Katia and Maurice Krafft features tons of stunning footage of boiling rivers of lava and boiling volcanoes. It’s “wow” with a capital W and always fascinating, if not hypnotic, and you can easily see why the Kraffts have become so obsessed with these earth-shaping phenomena. Of course, there’s sudden danger that comes with storm-chasing volcanic eruptions, and the couple died in the 1991 eruption of Mount Unzen in Japan. The film’s title is deliberately multi-layered, referencing the couple’s love for each other as well as their unquenchable passion for all things hot, molten and fluid. Narrated by Miranda July with a warm but oddly flat and twee intonation, the film transforms Krafft’s extensive ’87 archive into a global travelogue punctuated with eruptions and opulent rivers of red. In its construction, “Fire of Love” is reminiscent of Werner Herzog’s “Grizzly Man” (2005), for there too an obsession with something massive and deadly threatens to become deadly in almost every picture – and eventually does. Too bad “Love” doesn’t have the contagious irony and existential curiosity of Herzog. At the Landmark Kendall Square Cinema, 355 Binney St.

Billy Porter, who starred in the trans-gay series ‘Pose’, against the AIDS crisis of the 80s and 90s, goes behind the lens for this ‘Clueless’-like high school play about a confident but guarded black, transgender a teenager growing up in Pittsburgh with ambitions for New York or Los Angeles As Kelsa, Eva Reign is confident and bold, though the film, Porter’s debut, could use more of the same. Kelsa’s besties, dance diva Em (Courtnee Carter) and punker Chris (Kelly Lamor Wilson), have big personalities, though we don’t know much else about them. Kelsa is interested in Khal (Abubakr Ali), a thoughtful and kind Egyptian Muslim boy, and there are the mean girls and a transphobe, which only becomes a factor later. Kelsa and her team’s use of zoological classifications to let you know who’s who (baboons, wolves, meerkats, etc.) at school keeps things going, as does Porter’s vitality and keen sense of fashion. . On Amazon Prime Video.

Tom Meek is a writer living in Cambridge. His reviews, essays, short stories, and articles have appeared in literary journals The ARTery, The Boston Phoenix, The Boston Globe, The Rumpus, The Charleston City Paper, and WBUR’s SLAB. Tom is also a member of the Boston Society of Film Critics and bikes everywhere.