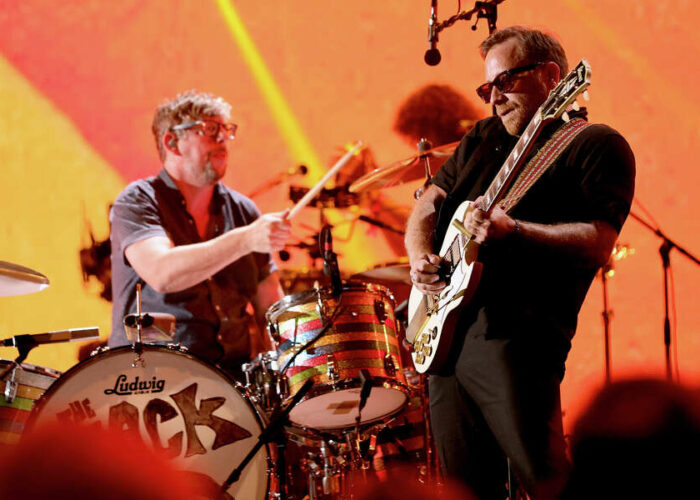 (L-R) Patrick Carney and Dan Auerbach of The Black Keys perform onstage during the 2022 iHeartRadio Music Festival at T-Mobile Arena on September 23, 2022 in Las Vegas, Nevada.

When I think of the Black Keys, I always think of a 2006 interview with drummer Patrick Carney, when he took the call from a Holiday Inn in Wisconsin. “I’m looking at a dumpster full of drywall and wallpaper. For lunch, I had a stick of Wisconsin beef and a sassafras root beer.

By then, the Black Keys had played Rudyard’s and the duo was about to play Numbers, two Houston clubs that must now sound serious and quaint to Carney and guitarist/vocalist Dan Auerbach. Two decades after releasing “The Big Come Up,” the duo have emerged from Akron, Ohio to become one of the biggest bands currently releasing albums and touring. That they’re playing at the Cynthia Woods Mitchell Pavilion on Saturday, a big throwback to the early days of club gigs with weirdos in parking lots (another old Carney story) and uncertainty about whether they’d made a tremendous mistake professional trying to play modern garage blues in the 21st century.

Auerbach took the time to talk about the bad old days, while discussing the process behind “Dropout Boogie,” the band’s 11th album, which was released earlier this year. The title was taken from an old Captain Beefheart tune, a reminder that while the Black Keys have become an arena-level live band, their roots were born in the strange soil of Akron that gave the world Dev.

Q: There are fewer and fewer rock bands working on the concept of an album. But you still treat it as something deliberately created rather than something to be cut into pieces.

A: I feel like Pat and I are part of the last generation of bands that started before social media and everyone had cell phones. We were still using Mapquest when we started. We printed the directions for the concerts. So yes, we have seen the industry transform.

Q: I guess there are pros and cons with only two people for that long. There is no deciding vote. But looking back, I imagine those early years of touring created a kind of bond that isn’t easily broken.

A: We were lucky. We definitely made a name for ourselves by hitting the road. And we hit the road when we were young, zigzagging across North America and not making money. For a while, I felt like with every tour, we start over. There was this time, we felt there was no possibility that we could keep doing it. It was a psychotic way to shoot. We drove several vehicles into the ground. Because of that, I find it hard to stay still these days. I am getting impatient.

Q: There was a period in the CD era where albums went to 18 songs and 78 minutes. Which can create a twisted listening experience. “Dropout Boogie” reminded me that 10 songs is an digestible amount, whether it’s streaming, on CD, on an LP… But you two seem to want to create as much breadth as possible in that time frame.

A: It’s a byproduct of how we were raised. We grew up in a time when hip-hop was pop music. But we also listened to blues records. And Captain Beefheart. It was a crazy mix. And Pat’s uncle, Ralph Carney, was referring to us (expletive). And we were like my cousin, Robert Quine. . .

Q: Wait. What? Am I the last person to know? He’s one of my favorite guitarists of all time.

A: Yeah, Quine is my middle name.

A: So for us, we were listening to too much modern stuff to be retro stuff. But we also started playing blues-based music that we loved. But we never played in blues clubs. We played in rock clubs which were a bit aesthetically correct for us. But we were seeing these guys we liked – RL Burnside and T-Model Ford – playing in rock clubs because of that Fat Possum mindset, where older music is translated for newer audiences.

Q: You all covered some of your blues heroes on “Delta Kream” last time. Did this feel like some sort of creative reset? I assume you both have telepathy at this point, which can be a blessing and a hindrance.

A: I think releasing that record was a hard reset. And that put us in a very good state of mind. We knew we weren’t the same people we were when we were 16, 17, hearing some of this music for the first time. It was just us working on raw inspiration, you know? And fly by the seat of our pants. But there is a gift we have received, now is the time to think about it. Since we were 16, 17 years old, we worked for a long time without prior planning. And even on that record, there were three or four songs that were improvised first takes. But working with people like Danger Mouse, we got to see people who treat it more like a profession. As we get older, we appreciate this motto more of knowing each other since we were children. But as we get older, I think we do things better.

Q: I feel like the album wasn’t a concept album. But there was a restlessness at the beginning and a respect for the house at the end. “Didn’t I Love You” is a stronger closer. It’s a song of regret in a way, but with a question that suggests not only reflection but impending change.

A: And I don’t know if I meant it that way. But that song was just flowing in a decent way for us, I guess. We didn’t think of it quite as a concept album. The concept pretty much ended with the album title and album cover. But it was a first improvisation. We liked the idea of ​​ending on a pure and raw title, you know?

Q: Looking back a bit, I’ve long wondered if the ‘Thickfreakness’ album cover was an homage to the jailbreak/pomade scene of ‘Raising Arizona’.

A: No. No. But I love that scene in the movie. I did not think about that. But no, it’s just Pat’s hand dipped in there.

Q: There was a time when ZZ Top members weren’t allowed by management to participate in other people’s albums. But that changed a few years ago. And it makes sense with you two. And here he is on “Good Love”.

A: ZZ Top had a huge influence on us. Maybe not at first. I didn’t get to them until later, because I knew them as guys who made music videos and used drum machines and (expletive). But I kept hearing their early records and the first couple floored us. And Billy was one of our earliest supporters. He came to one of our first tours, a show in New Mexico. It was just me, Pat and his brother in a van. But working with him reminded me of working with Dr. John. Dr. John could sit in front of this inanimate object and give it a voice of its own somehow. No one else has made this instrument sound like this. And that’s what Billy Gibbons does. It doesn’t matter what guitar he plays. It looks like him. His touch is reflected in it. … He came to the studio and we gave him a guitar he had never played. Just a normal guitar with normal strings plugged straight into an amp, and he strummed it and it instantly sounded like Billy Gibbons. It’s so rare. And it’s very cool to be able to witness something like that. He just sat there with a guitar and a bottle of red wine and jammed with us. And then he got up and left.