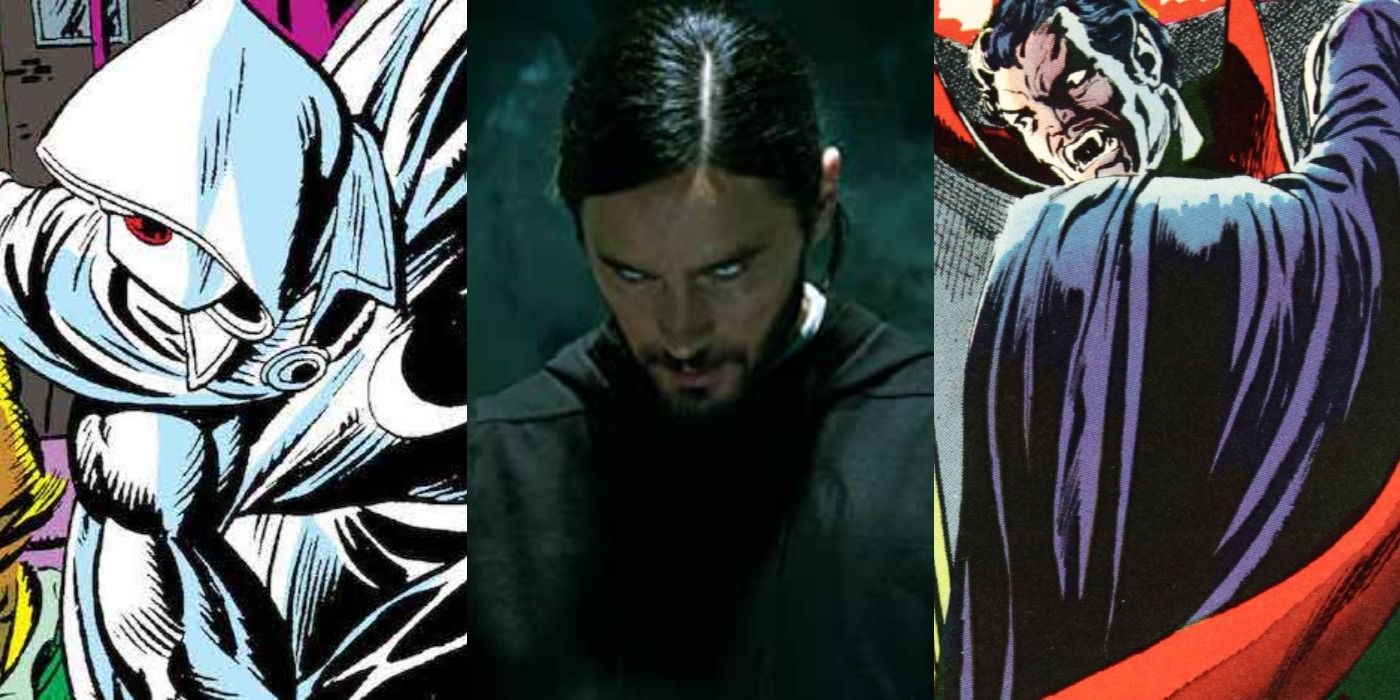 The new MCU movie, Morbius, may be getting poor reviews, but its title character is the product of one of the most unique periods in Marvel Comics history. When the strict guidelines of the Comics Code Authority were relaxed in the early 1970s, comics were able to depict horror and occult themes. Morbius the Living Vampire appeared in The Amazing Spider-Man #101 in 1971 as part of a wave of horror-themed characters, including characters like Moon Knight and Blade.

Many of these characters appear in the MCU and Sony Marvel universe and many more, like Werewolf by Night, are expected to appear soon. The comic book history of Marvel’s horror-themed characters likely provides a roadmap for their cinematic future. The majority of them are intertwined and will likely be live-action as well, leading into a horror-themed branch of the MCU.

As its popularity grew, its story became more elaborate, with direct and deep connections to ancient Egyptian mythology and more psychological modes of horror. Moon Knight remains connected to the horror branch of the Marvel Universe via the Midnight Sons and will likely be so in the MCU as well.

Doctor Strange is considered one of the most iconic superheroes in the Marvel Universe and while not a product of the horror-themed period that spawned characters like Moon Knight , it ties directly into some of the most terrifying aspects of Marvel Comics. .

Gruesome villains like Gargantos and Shuma-Gorath, some of Doctor Strange’s most powerful villains, draw directly from HP Lovecraft’s mythology. Many of his stories in the comics involve demonic characters and occult themes straight out of a horror comic.

If not, Bloodstone is a figure likely to appear in the MCU in the near future given his connection to major characters who have already debuted in the franchise. She is a monster hunter and a former member of the Midnight Sons and the Fearless Defenders.

Otherwise, Bloodstone has undertones of Buffy the Vampire Slayer and Van Helsing, using a variety of practical and mystical tools to hunt many types of monsters. She also has superhuman powers, including immunity to vampire bites.

Magik is a mutant and deeply connected to the world of the X-Men, but her tragic backstory puts her firmly in the context of horror comics. Illyana Rasputin was stranded as a child in the dimension of Limbo, inhabited by demons.

As her name suggests, Magik became one of Marvel Comics’ most powerful magical beings as a result of her experiment. For a time, she was overtaken by the Dakrchilde, a demonic version of herself. Now she has full control of her powers and wields the Soul Sword, a powerful mystical weapon.

Ghost Rider is inhabited by the Spirit of Vengeance and although he has a demonic appearance, he is actually an avatar of Heaven by virtue of his powers. He emerged during the horror revival of the early 70s, first appearing in Spotlight on Marvel #5 in 1972.

Ghost Rider was part of the Midnight Sons alongside Morbius and it’s very likely that he will be part of the MCU in the near future. He also has strong ties to Moon Knight and Blade, and it’s only a question of which version of the iconic character will appear.

Blade is another classic character from the 1970s horror movement, first appearing in Dracula’s Tomb #10 in 1973. He is a half-human, half-vampire who hunts vampires with his superhuman powers. Blade has already appeared in the MCU thanks to a voice cameo from Mahershala Ali in Eternals.

Blade has been a member of the Midnight Sons, Avengers, and especially the MCU, M:13. This British organization focused on supernatural threats could coalesce into the MCU thanks to Blade’s close proximity to Dane Whitman and Moon Knight, both located in London.

Marvel Comics has adopted many classic horror characters straight into its mythology, including Frankenstein’s monster. The character first appeared in 1953, before the true Marvel Universe emerged, but later became an important part of it.

A robot version of the character fought the X-Men in the 1960s and the appropriate monster then appeared some time later. He titled his own series, Frankenstein’s Monsterin the 1970s and has been linked to characters like Werewolf by Night and Elsa Bloodstone.

Man-Thing first appeared in 1971 in wild tales #1. It’s a sentient plant creature from the Florida Everglades with some superficial resemblance to DC Comics’ Swamp Thing, but there are significant differences between the two.

Although a minor character compared to Blade or Moon Knight, Man-Thing is a major factor in the Marvel Universe, as he is the guardian of the Nexus of all realities. This conduit to the Multiverse ensures that Man-Thing will be in the MCU at some point, probably very soon.

Comic book fans know that Werewolf By Night is a major horror figure in the Marvel Universe. Jack Russell is a classic werewolf archetype and first appeared in the 70s, like most horror-themed Marvel characters, in Spotlight on Marvel #2.

Played by Gael García Bernal, he will appear in the MCU in the upcoming Halloween special and may actually appear earlier. Thanks to his close ties to Moon Knight, there’s every chance he could appear in his series before it’s over.

Dracula is popular culture’s classic vampire, and he first appeared in the Marvel Universe in Dracula’s Tomb #1 in 1972. The relaxation of Comics Code Authority guidelines allowed this iconic villain to become an integral part of Marvel Comics.

Although initially separate from much of the Marvel Universe of the 70s, Dracula will eventually play a major role and could do so in the MCU as well. He is Blade’s enemy and fought the X-Men. Dracula continues to be a menacing figure for many characters in the modern era.

NEXT: 10 Best Current Horror Comics You Should Read

Deadpool’s Most Brutal ‘Death’ Is Too Bloody For The MCU

DARBY HARN is the author of the novels Ever The Hero, The Judgment Of Valene and A Country Of Eternal Light. His short fiction appears in Strange Horizons, Interzone, Shimmer, and other locations.