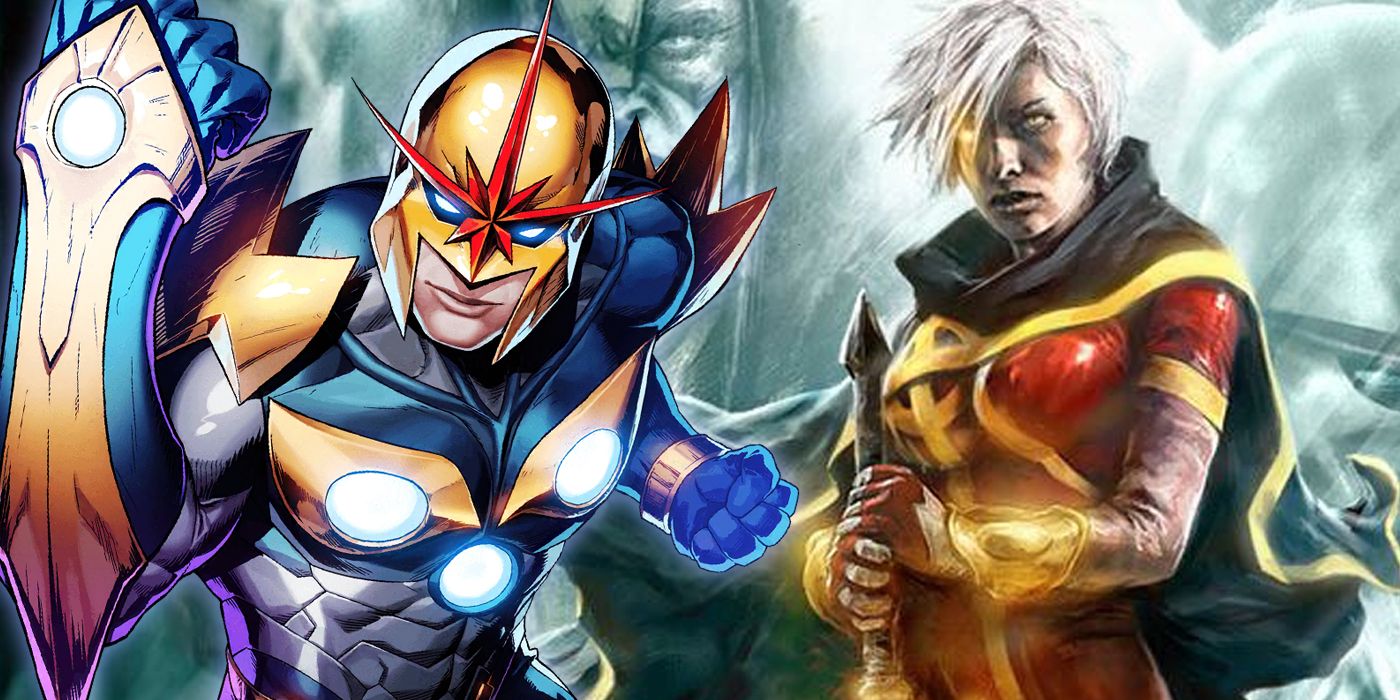 10 Characters Who Could Join Richard Rider In The MCU

The announcement that Richard Rider will finally be heading to the Marvel Cinematic Universe as Nova has fans excited for the human rocket’s debut. However, Nova has a long history in the Marvel Universe, and he’s made quite a few friends, allies, and foes over the years who could join him in the next MCU project.

While important characters like Nova Denarian Rhomann Dey have already appeared in the MCUs guardians of the galaxy franchise, there are quite a few other heroes and villains associated with Richard Rider who could appear alongside Nova when the human rocket ship debuts in the MCU.

Richard Rider wasn’t the only member of his family who dreamed of being a hero, as his younger brother Robbie spent years looking up to his superhero brother before he too was offered a position in a reformed Nova Corps. Robbie excelled as the Nova Centurion despite Richard’s protests and attempts to protect him.

When Robbie was left helpless in space by the Nova Corps, he was brainwashed by a group of armored insurgents known as the Talons. He first became Talon-R before gaining additional cosmic abilities by bonding with the Nega-Bands, eventually becoming the evil known as Dark Starhawk.

One of Nova’s greatest villains was an ancient mutant wizard known as Anath-Na Mut who served the pharaohs, but after being exiled from his duty he found a powerful artifact called the Ka Stone. It bonded with him and granted him incredible power and immortality, though after wandering the Earth for thousands of years he grew weary of his eternal life.

The Sphinx eventually located the new Richard Rider, whom it considered the only hero powerful enough to end his own life. As Nova refused to kill him, Sphinx became one of his most powerful enemies who also harbored a dangerous death wish.

Richard Rider joined the Sphinx and a group of other heroes known as the Champions of Xandar to help save the planet from destruction at the hands of an invading Skrull force during the Skrull/Xandar War.

The team included heroes and adventurers like 50s hero Comet, his son Crimebuster, warrior Xandarian Powerhouse, supervillain Diamondhead, and brilliant Xandarian Protector. The team chose to remain on Xandar as champions, though Nova returned home without her abilities while the Sphinx betrayed the team only to be defeated by the Fantastic Four.

After Nova relinquished his powers after the Skrull/Xandar War, he returned to a normal but unfulfilling life as a civilian. However, he was hunted down by Dwayne Taylor, a traumatized orphan who spent his life and resources training to become the vigilante known as the Night Thrasher. Night Thrasher was able to revive Rider’s abilities and he returned to action as Kid Nova.

The two heroes then formed a new team of superheroes called the New Warriors alongside other heroes like Firestar, Justice, Speedball, and Namorita. The team grows and changes over the years, though Nova stays with them until her responsibilities take her off-planet.

6 Richard Rider had relationships with the likes of Ginger Jaye, Laura Dunham and Namorita

Nova had a few romantic relationships over the years, starting with a few civilians that would affect her life for years to come. Her high school sweetheart, Ginger Jaye, ended up with an abusive husband whom Richard Rider accidentally killed during a fight when his powers went haywire. He later dated a woman named Laura Dunham, though his life as Nova continued to get in the way.

He eventually found love with his New Warriors teammate Namorita, which turned out to be one of his longest relationships on Earth. While he was also involved with Gamora while fighting in space, the other three women are also possible candidates for Richard Rider’s love interest in the MCU if the project explores that aspect of his life.

Nova made quite a few allies while operating on Earth, which included heroes like Spider-Man and the Fantastic Four, both of which are either in the MCU or on the way. One of his close allies was a young man named Chris Powell, who had found a mysterious amulet that allowed him to transform into the armored hero known as Darkhawk.

Darkhawk’s origins were strange and ultimately revealed to be a lie, as he learned the truth about his amulet’s cosmic origins. he was a member of the Brotherhood of Raptors, a secret organization created by the Shi’ar tasked with manipulating galactic politics. Powell got a cosmic upgrade that allowed him to join his friend Nova in epic space battles and events.

4 Ko-Rel is a Kree warrior who joined the Nova Corps before becoming Worldmind’s avatar.

When Richard Rider was the last Nova in the universe, he gained a connection to a sentient AI known as Xandarian Worldmind. The Worldmind focused on preserving Xandarian culture and reforming the Nova Corps, which sometimes put it at odds with Richard Rider.

RELATED: 5 Reasons Nova Is Actually More Powerful Than Captain Marvel (& 5 Why It Never Will Be)

When Rider was incapacitated on a destroyed planet during the Annihilation: Conquest event, the Worldmind deputized for a Kree soldier named Ko-Rel. She took over Rider’s duties as Nova-Prime until she was killed in battle. The Worldmind then used memory engrams and Ko-Rel’s likeness as an avatar when communicating with the Nova Corps.

Nova isn’t the only hero known as the Protector of the Universe, as that title once belonged to a former SHIELD agent named Wendell Vaughn. He was chosen by the cosmic being Eon to become the mighty hero Quasar, who wielded the mighty Quantum Bands.

Vaughn served the galaxy as a Quasar for years until he gave his life in battle, and Richard Rider also briefly served as a Quasar. However, the Quantum Tapes eventually went to Phyla-Vell, Captain Mar-Vell’s daughter, who became the new Quasar for a time. SWORD Agent Avril Kincaid is the new Quasar, which highlights the potential for adding legacy heroes to the MCU.

Nova formed a united front which he led against the Annihilation Wave, though it only ended after Nova and Annihilus’ epic battle which saw Rider use his Nova Force against the powerful Control Rod cosmic wielded by Annihilus. While the insectoid monster first appeared as the villain of the Fantastic Four, it will forever be measured by its rivalry with Nova from Annihilation.

Richard Rider isn’t the only Earth human to have taken the title Nova over the years. Following Rider’s apparent sacrifice to close the rift and stop the threat from the Cancerverse for The Thanos Imperativea young teenager named Sam Alexander found his father’s damaged Nova helmet and put it on.

He was transformed into a new Nova and started working with teams like the Avengers and Champions. He also found himself embroiled in galactic affairs while searching for information on his missing father. Eventually, Richard Rider returned and established a relationship with his young successor that could be expanded even further for the MCU.

NEXT: Every Nova Team Joined In The Comics


following
The 10 Worst Things About Superman

An all-around entertainment journalist, writer and geek, Scoot Allan wrote for print and online media sources such as Geek Magazine, GeekExchange, GrizzlyBomb, WhatCulture, RoguePlanet.tv and Urban 30 before joining CBR, ScreenRant, GameRant and The Gamer in as staff writer. He likes salad but prefers fries.

The Wisconsin Film Festival returns in person on April 7

Netflix Best Series: 10 of the highest rated TV shows on Netflix UK, according to Rotten Tomatoes